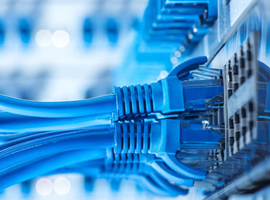 Network cable acts like a medium through which information travels from one network device to the other. The type of cable selected for a network depends on the network’s size, topology, and procedure. The various types of network cables act as the backbone of the network infrastructure.

Selecting the correct type of network cabling can effect various business functions because enterprise network admins employ new technologies. The type of network cable used in any network infrastructure is one of the most vital aspect of networking in various industries.

It has a single copper conductor in the middle. A plastic layer provides insulation between the braided metal shield and center conductor. The metal shield blocks outer interference from motors, fluorescent lights, and other computers.
Coaxial cabling is extremely resistant to signal obstruction though it is complex to install. It can handle great cable lengths between network devices than the twisted pair cable. The two types of coaxial cables are thin coaxial and thick coaxial.

It is a special kind of copper telephone wiring used in business installations. An external shield which functions as a ground is added to the normal twisted pair telephone wires. Shielded twisted pair may be the answer if you want to place the cable in an area with potential interference and risk to the electrical current in the UTP. Shielded cables can also help in expanding the distance between the cables.

Fiber optic cabling consists of a center glass core surrounded by many layers of protective materials. It removes the problem of electrical obstruction by transmitting light rather than electronic signals. This makes them perfect for certain atmospheres which contain huge amount of electrical interference. It has become the standard for connecting networks between buildings because of its resistance to lighting and moisture. 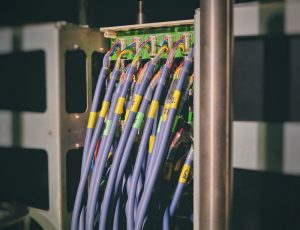 Ensure your system establishment is 100% consistent and converse with Dimtech today.

It is the most admired type of network cable in the world. UTP cable is used for both conventional telephone and computer networking.

The various wiring schemes for UTP are:

For the development of a successful network in an organization, understanding the different types of cable and how they affect other aspects of a network is vital.

RJ45 and CAT 6 are the most widely recognized innovations out there with regards to organize cabling. As system cabling masters, Dimtech comprehends the significance of utilising the right cabling.

Our network cabling work consents to all statutes, directions, and models. This is vital on the grounds that numerous suppliers will utilise shabby, substandard cabling which does not follow national norms. Ensure your system establishment is 100% consistent and converse with Dimtech today.